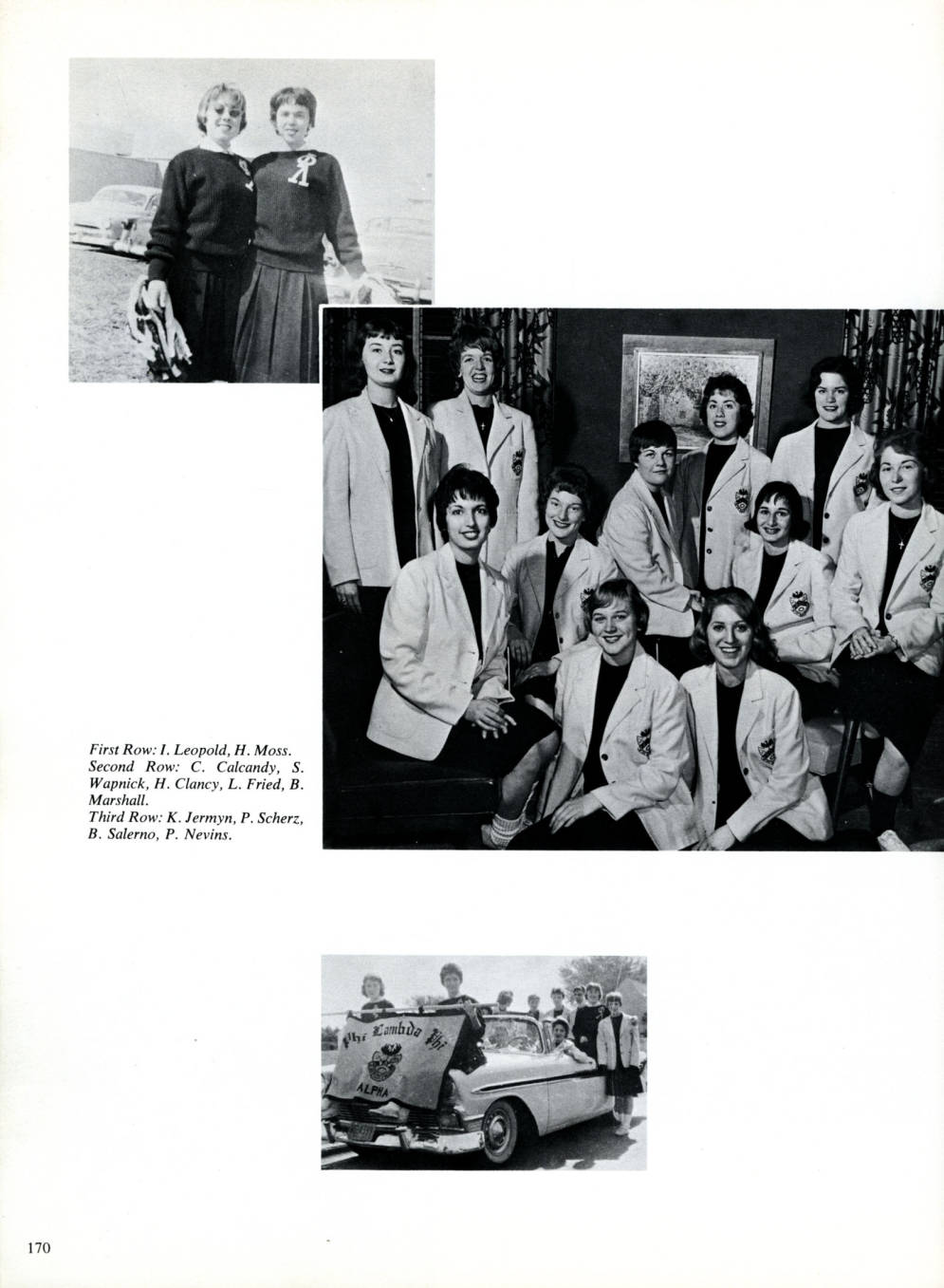 PLPAA asked Cathy Calcandy Swensen ’62, one of our founding sisters, to share some of her Phi Lamb memories with other alumnae. What follows is her account of the early years of our sorority which she helped to found.

“The night we found out that we were officially recognized on the campus by the Inter-Sorority Council in April 1959, we jumped in our cars and drove down to Buckland’s (where else?) and celebrated! It had been an arduous task, and we were thrilled that all of our hard work had materialized in Phi Lambda Phi!

We held our Fantasia Ball on October 24, 1959 at the Oswego firehouse. It was pretty impressive for the first one!

I remember our participation in the 1959 Greek Games and not doing too badly. We won third place in cheerleading. We looked so sharp, and Marian Golden Gold ’62 had a yellow and black convertible that was part of our entrance to the games. Some of us sat in the car and the rest marched behind in our yellow blazers.

Spring Weekend 1961: My memory wants to say we came in first place in the float parade contest. The theme, as I recall, had something to do with the states and we chose to do Hawaii. Bev Hunter ’62 was the creative leader behind the project. She pretty much thought of the design, and between her and some of our other ”geniuses,” we were able to construct the float. We got a farmer to let us use his barn to build the thing, which took a good week to put together. It was really beautiful!!!!!!!

Our first Pledge Class: We were thrilled at the number of women who chose Phi Lamb. We became very close as they too were helping to establish the sorority. We were truly a sisterhood. We didn’t have the house yet, so we met in dorm rec rooms.

Our new sorority house: Finally, we had our house, and it was beautiful! Mrs. Whelahan was instrumental in our purchasing the house, and she pretty much ran it for a while. Mrs. Jewell was our cook. She was a petite, spry lady who really cared about us. Our housemother (I don’t remember her name but can see her as plain as day) was kind of strict and was forever reminding us of our manners and protocol.

First Rush while living in the sorority house: Bev and some others took fall leaves and encased them in clear wax so they wouldn’t crumble and/or dry up. We pinned them all over the house on the doors and woodwork. The house really looked beautiful, and I think the effort that was put into decorating made a great impression on the prospective pledges.”

Striving always for unity;
We bring to you our company;
You’ve met us – now don’t forget us.
We are the sister of Phi Lambda Phi.

All rights reserved. Phi Lambda Phi Alumnae Association™
We use cookies to ensure that we give you the best experience on our website. If you continue to use this site we will assume that you are happy with it.Accept